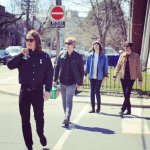 Magic Shoppe have oﬀered up their own concoction of shoegaze-y, dark and heavy psychedelia on four EPs and three full-length albums across an eight-year period. The members of the group are Josiah Webb (vocals/lead guitar), Stevie Moonboots (bass), Dave Mulvaney (drums), and Richie Gibson (rhythm guitar).

In the wake of 2018s In Parallel full-length (released in the US by Little Cloud Records and in the EU/UK by Cardinal Fuzz) and a 26-day tour of the EU, as well as some US dates around Milwaukee Psych Fest in April 2019 the band are pleased to announce their upcoming full length (entitled Circles), which will be released in November 2019. Once again, this record will be released on beautifully colored 12-inch vinyl by Little Cloud Records in the US and Cardinal Fuzz in the EU (also available worldwide on Spotify, Apple Music, etc..).

The band will be touring the EU in early 2020 in support of the new record.

Candy Flip (the first single oﬀ of Circles) is being released digitally via Spotify, Apple Music, etc.. in September 2019.

Hailing from Boston, Massachusetts, Magic Shoppe released Wonderland in October 2016. This release is a departure from their last release, Interstellar Car Crash, in that theyve mostly abandoned the flowery side of psych for a darker, fuzzier corner of psych. The track Head On the Floor unleashes a shit load of reverb that never lets up. Stars Explode gives a nod to Raw Power era Iggy Pop (in the guitars at least). Kill ushers in a bit of Sonic Youth along with seriously trippy vocals, while Hearing Voices is only slightly less lethal and drugged out than its predecessor. By now, hookah pipes and bongs are in rotation as listeners are lost in the psyched out dreams induced by Wonderland. Blowup meshes BJM guitar with late 60s sonics, and backs away slightly from the noise fest on the previous tracks.